Let’s consider a poor man’s data encryption in the database. We’ll use AES128 CBC algorithm to encrypt the data. The application is written in such way that it can encrypt/decrypt the data while doing database operations. This solution is license free, works with no additional database licenses. A new requirement has arrived – the data must be replicated to the target database, which does not use any encryption. The replication and decryption would be performed by Oracle GoldenGate. Let’s see how this can be done and what is the overhead of the decryption process.

As told before, we can’t afford Oracle TDE licenses to use encryption in the database. They are too expensive. We have to encrypt the data by our self. The data will be decrypted during data replication by the Replicat proces. The data will be decrypted in the target database. This solution is good when the source database is in cloud (the data is encrypted) but the target database is on-premise.

The key question is how to decrypt the data during replication by OGG. There are actually two options. Either the decryption can be done using some external SQL calls (SQLEXEC) or using User Exit Function (custom C code).

A simple test shows that the functions are working correct:

Table schema for the test is:

Both tests are performed on 2 hosts:

Both hosts are both connected with 1Gbps direct connection. The ping is 0.5ms.

In the test scenario is:

Options I have used are:

The test scenario is:

In the end I will calculate the average speed of data replication of 1M INSERT commands.

During no decryption the Replicat code is simple – the data on the target would be the same as on the source:

To decrypt the data using DBMS_CRYPTO in the target database an SQLEXEC call has to be made:

The last scenario is using my custom code of C function that is decrypting the data:

I will not publish the code of the program since it is not finished and does not handle all the possible errors. The code is simply waiting for EXIT_CALL_PROCESS_RECORD event and when this event is called it checks if the appropriate table and column name appears. If it matches, the data is decrypted and returned to the Replicat process. No additional external calls are being made. No network calls are done. Everything is executed on the OGG host. 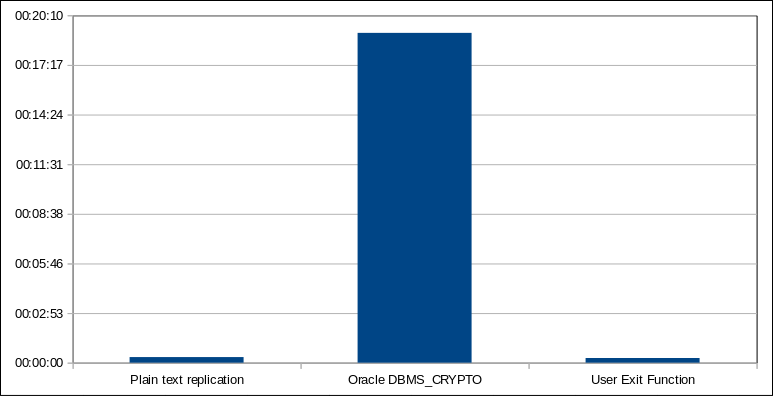 The first obvious conclusion is that running SQLEXEC through the network is horribly slow. It is unacceptable as a solution for replicating large amount of data as the overhead is too big.

What is more surprising, the cost of running a user exit causes a smaller row to be inserted into the database. This is faster then just inserting encrypted data in VARCHAR2. Maybe binary encrypted data would be faster (stored in VARBINARY, not VARVHAR). I would also like to add that the time of encryption is very short in comparison to the time of data processing by the database. Using another encryption algorithm like AES256 would make very little difference on the time of the replication.

This concludes the first part of encryption tests. To be continued.