One of the key aspects for replication is checkpointing. A target database checkpoint tells which transactions are actually committed and which not yet. This is a key aspect of transactional replication. Let’s look how that works for the Oracle GoldenGate Classic Replicat.

Disclaimer: This article is just about Classic Replicat and single thread. It is just an introduction to a bigger topic. I have read this text after writing and I’ve noticed that all this is very obvious, but it may be an introduction for somebody who is new in this subject.

For Integrated Replicat and other parallel replication techniques the picture is a bit more complicated and will be covered later.

No matter what how the transactions are interleaved on the source database what is most important for replication is the order of the COMMIT operations. 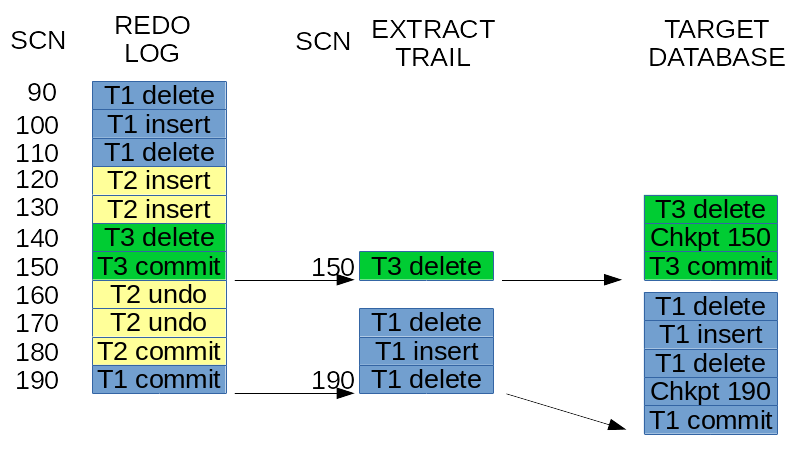 On the image above there were 3 transactions:

Yes indeed – rollback operation causes a commit to appear in the redo log.

According to COMMIT sequence the first transaction that will be replicated is T3 – at SCN 150. Then T1 – at SCN 190. T2 since it was rolled back would not appear in the trail files. The Extract process will automatically ignore it, as it never happened. It has no importance for replication. It might just have never happened and the effect would be the same.

The OGG trail will only contain: T3 transaction and T1 transaction. OGG does not write a special commit record in the trail. All DML operations that appear in the trail have special signatures (TransInd) which describes the context of this DML: the beginning (0), the middle (1) or end (2) of transaction or single DML operation transaction (3).

If anything goes wrong, then the process (Extract or Replicat) might go some time back in the source and get missing information that was lost and is partially written to the trail.

There might be situations where it would be very difficult to tell what is the exact position of the Replicat process. Which transactions are committed and which are not. In case of a complex replication (like using INSERTALLRECORDS) it is not possible to reveal the information what is committed and what not. And you can’t just use HANDLECOLLITIONS to somehow manage that.

In those situations (and maybe also in some other disaster scenarios) without the checkpoint table in the target database the Replicat process can never be sure which exact transaction were already replicated and which not.

This way the internal transaction mechanism inside the database will keep up to date information about what is exactly replicated and what not yet. After any of the scenarios (mentioned above) it is possible to exactly position the Replicat in the exact place where it finished earlier. Even all trails and checkpoints could become corrupted an recreated (from Redo and Archive logs) and still it is possible to fully recover the replication without any loss. You might even have to setup the replication from scratch. All you might need is the redo/archive logs from the source database for the missing period.

This is just the simplest case. In the next article we’ll look at more complex situations – when parallel replication is being used.